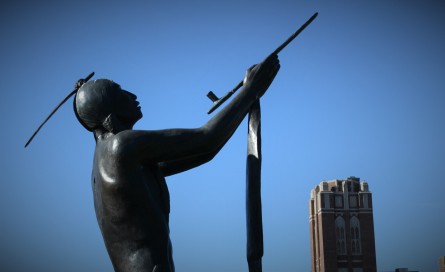 Meeting continuously since 1983, the Norman Business Association is a historic, civic organization with a membership of small business leaders who have helped shape Norman’s business community for the 21st century.

The organization was founded by a handful of young entrepreneurs inside a Campus Corner restaurant in October 1983.

The Dow Jones Industrial Average closed that year at 1258, the federal deficit was at $1.3 trillion and the median household income was just under $21,000. The U.S. economy was climbing out of a recession with the national unemployment rate dropping from nearly 11 percent at the beginning of the year to 8.3 percent by the end.

William Banowsky was the University of Oklahoma’s president. OU’s football team was just completing another 8-4 season, the latest in a succession of disappointing finishes for the traditional powerhouse.

Through the 1980s, the club created its logo and drafted its bylaws. In the 1990s, the club drafted a mission statement expressing its commitment to Norman’s small business community, and it published its first website.

The first club meeting was held at the Red Parrot, a popular Norman restaurant operating out of a remodeled gas station on S University Boulevard.

The club’s first president was founding-member Dwyer, who went on to become an author and leading Oklahoma historian.

At the time, Dwyer and other founding members envisioned the club as a helpful resource for business builders.

It had social and camaraderie benefits, like the Rotary Club, Dwyer said. But the NBA would make an even more direct and effective effort to help its members build successful businesses.

It had a distinctly youthful feel, and its members were in their mid to late 20s. The club recognized members of the month, which went to those whose business referrals did the most to help other club members.

“When I first attended, we met in a little room on the west side of the old Holiday Inn on W Main and I- 35. I believe the room was called the "Bud Wilkinson" room. It was small and had only one table, approximately 10-feet long, and we sat in office chairs, the room could not have been over 8-feet wide and maybe 14-feet long.”

“I believe Ramey Foor, John Dwyer , Robert Wilkerson ( he sponsored me) his wife, Vanetta Wilkerson, Kim Bollinger, and Randy Woods were everyone that attended my first meeting,” Walden said.

The Norman Business Association has moved its meetings to several locations through the years, but they have always been held over breakfast and on Fridays.

Today, the club meets at 7 a.m. each Friday at the Trails Golf Club. There is usually a speaker invited to address current community issues or to share perspectives from interesting travels, avocations or achievements.

Some of the club’s founding members are still regular participants, enriching the club’s long tradition of friendliness, comradery and civic engagement. Guests and new members are always welcomed.